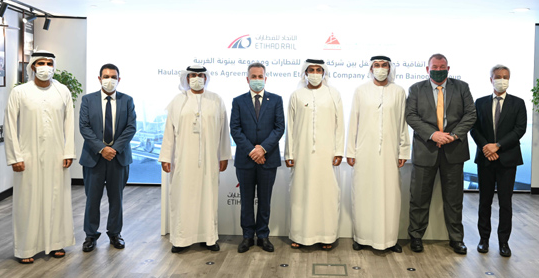 Etihad Rail, the developer and operator of the UAE’s National Rail Network, stated it has signed a strategic partnership with Western Bainoona Group.

As per the deal, Etihad Rail will deliver rail freight services for transporting onstruction materials from Western Bainoona Group’s facilities in Fujairah to Abu Dhabi and Dubai.

The partnership is one of Etihad Rail’s largest commercial partnerships for Stage Two of the UAE’s National Rail Project.

The deal will see a total of 4.5 million tonnes of Western Bainoona Group’s aggregates being transported annually on 643 trains from the group’s facilities in Fujairah to logistics hubs in the Industrial City of Abu Dhabi (ICAD) and Dubai Industrial City. Etihad Rail is allocating 70 wagons for each train (around 1 km long), with an approximate capacity of 7,000 tonnes per trip.

Group Chairman Mohammed Khalfan Al Hameli said: “Western Bainoona Group is honoured to become one of Etihad Rail’s partners. We look to leverage the freight solutions provided by the rail network, bolstering and facilitating trade between the emirates.”